Ian Miller ’00 Returns to Talk About His Work in Ukraine

10/28/2022
Old Boy Ian Miller ’00 visited St. Bernard’s on Tuesday.  Ian is a co-founder and director of Zero Line, a 501c3 charity delivering life-saving aid to the front lines in Ukraine. 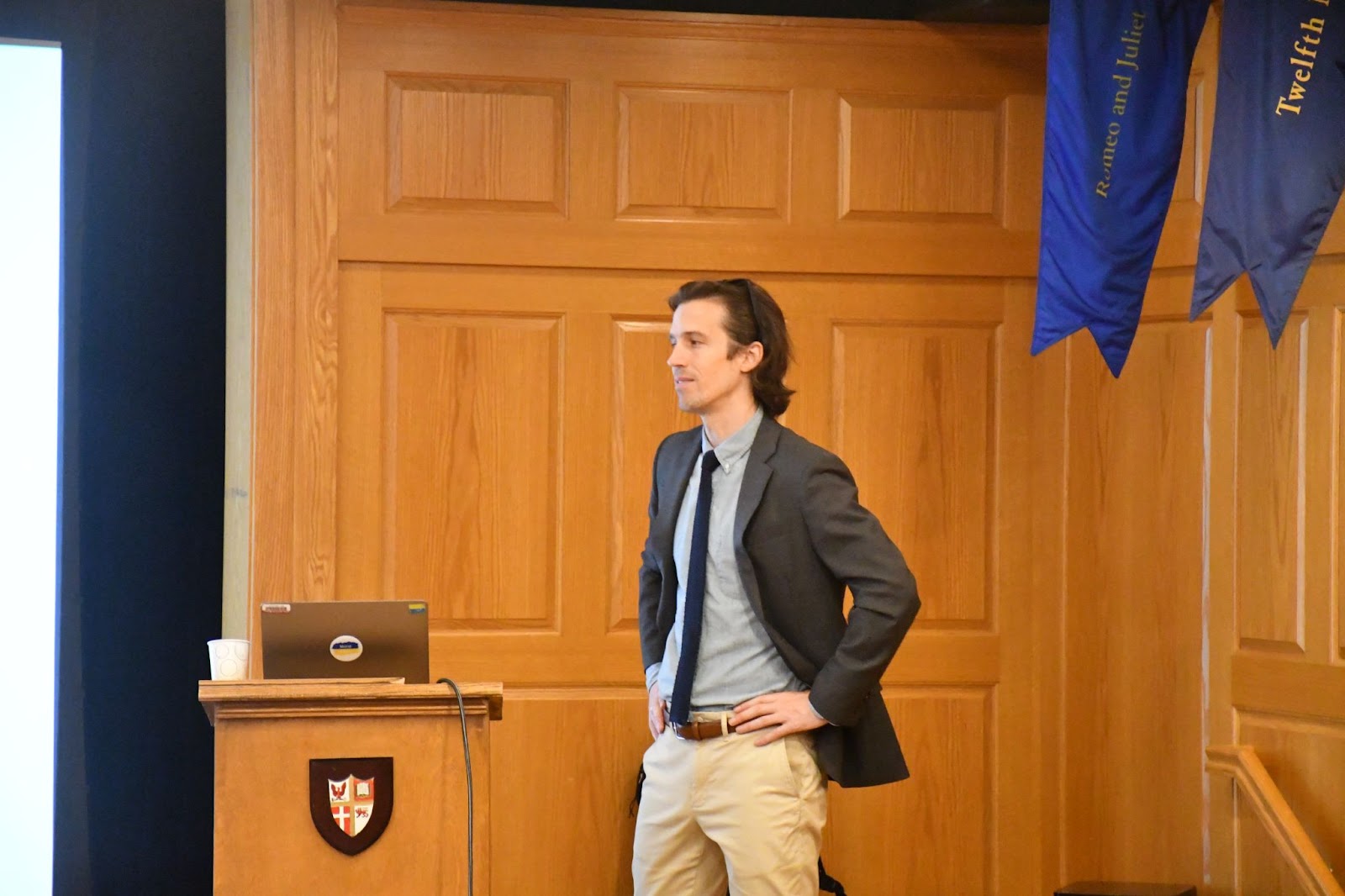 Ian gave a presentation on his work to the Upper School boys, visited with his former teachers, and finally stopped by the sixth grade to meet a Ukrainian student who joined St. B’s this fall.  Ian began his Upper School assembly by defining the "zero line," a term Ukrainians use to describe the front lines, the area where the most people are dying, and where Ian’s team delivers aid.  He then told the boys how his organization got started.

On February 23, he was in Boston managing an MIT software team.  He was so horrified by Putin's brutality and inspired by Zelensky's calls for help from private citizens, that he immediately began booking a plane flight so he could help the citizens of Ukraine as quickly as possible.  His future colleagues who were living in Ukraine, Finland, Poland, and the UK also heard Zelensky’s plea, and in a matter of days, they all met each other at the Poland-Ukraine border and got to work.  Before March, they were delivering aid to Kyiv's northern suburbs, which at the time were under attack by a 40 mile convoy of Russian troops. 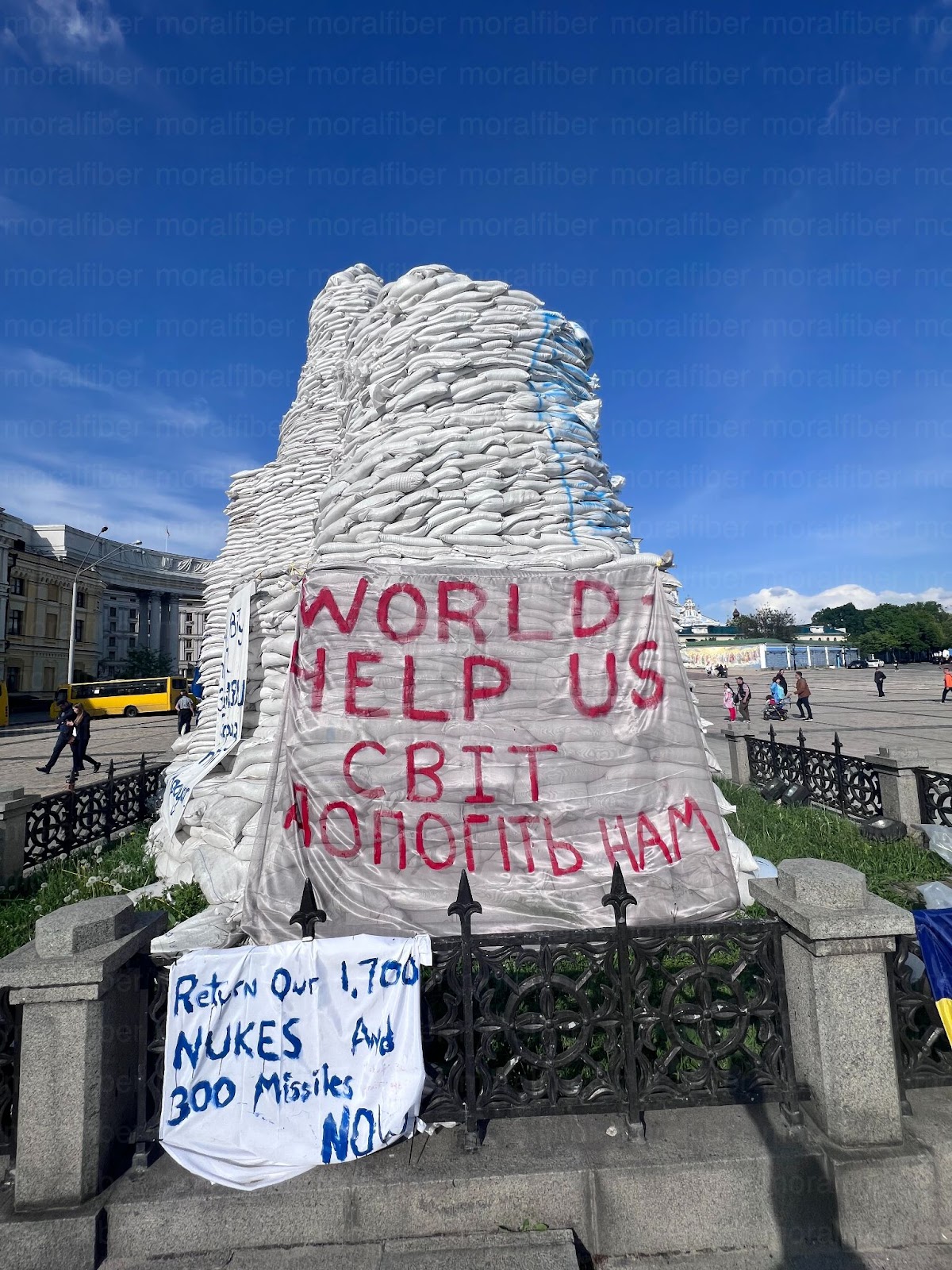 Sandbags in Kyiv
Ian noted that the St. Bernard's community was involved from the start. The first approximately 10 vehicles, 50 bulletproof vests, and 500 tourniquets that Zero Line delivered to the front lines were funded partly by over 20 donations from Old Boys, including major help from Old Boys Charles Miller ’98, Tom Russell ’98, Josh Black ’00, Alexander Dexter Jones ’98, Luke Cohler’00, and others.
Our Upper School boys are well informed on the war, and Ian was able to jump into a detailed description of what Zero Line does now. Their mission is to maximize the number of lives saved per donation and help end the war sooner. They do this by delivering high-impact aid to high-impact Ukrainians on the front lines. This aid includes vehicles with first aid kits and communications equipment, such as satellite phones and observation drones. 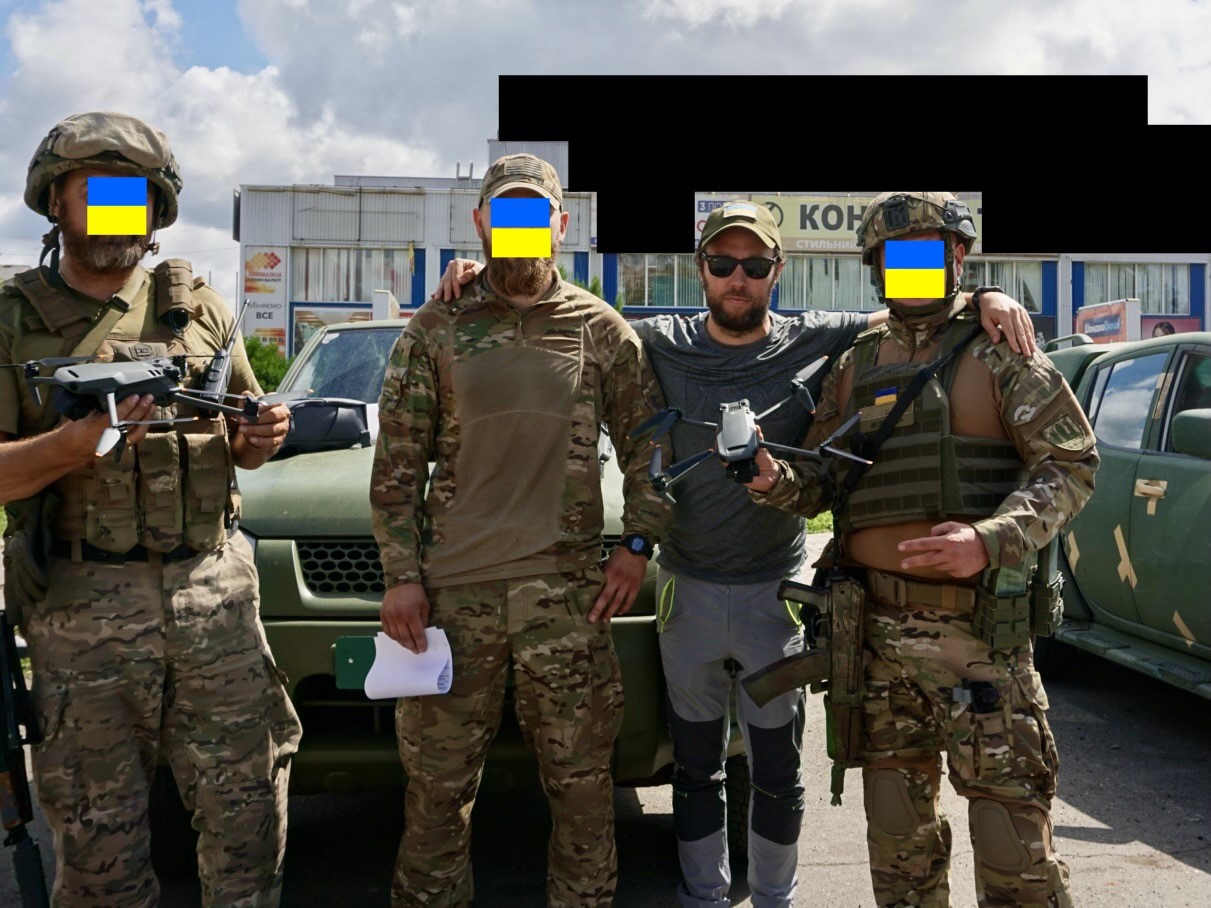 Soldiers with observation drones and Zero Line Director of Procurement Isaac Flanagan
Zero Line's team is made up of Ukrainians, Americans, EU citizens, and one Taiwanese, and their partners include hundreds of volunteers along the front lines and members of Ukraine's parliament.  The group utilizes the backgrounds of its team members who hail from the US Marines and Air Force, MIT engineering, and private sector supply chains.  Ian remarked that technology makes their collaboration much easier and more effective than it would have been just five or ten years ago.
“Front line aid saves lives both immediately and in the longer term,” Ian said as he showed the boys photos of a Zero Line tourniquet swiftly saving the life of a Ukrainian wounded by a Russian bomb.  Observation drones provided by his team inform people when Russian bombs are coming, and thus prevent such deadly injuries from ever occurring.  Ian explained how, in the longer term, “front line aid helps the front lines hold.” This support means that more cities can escape deadly occupation, and more cities can stay out of Russian artillery range. Ian showed firsthand photos of what happens to cities within Russian artillery range: mass bombing of residential areas.
Ian emphasized that “to save the most lives, it's not just what you deliver, but to whom.”  Thus Zero Line aims to support Ukrainians by spreading best practices in life-saving techniques so that their aid has a multiplier effect.  Ian said that to identify these front line workers and organizations, whom Zero Line calls "stars in need," you need constant boots-on-the-ground market research, including hundreds of hypothesis-driven interviews along the front lines.  Zero Line's leader of needs analysis, Evan Platt, earned his graduate degree at MIT in systems engineering and did his thesis on stakeholder analysis in large complex systems.
Ian then paused the presentation to take questions from the students.  He had planned to follow this Q&A with additional video footage from Ukraine, but the students' questions and comments proved too interesting to stop.  In response to the question, "What would you do if you were a Russian in Russia now?” a series of students suggested public protest, secretly organizing resistance, quickly fleeing the country, and possibly being brainwashed into supporting the invasion.  Ian's reaction to Oliver Bowcock was, "Please keep up the great work cultivating such thoughtful and introspective minds."  At the end of the assembly, seventh grader Kai Y. asked, “How can we help Zero Line?”  “Raise awareness,” replied Ian.  The St. B’s Community Service club plans to raise money to support Ian’s efforts and Ian told them that every little bit helps.
After the talk, John Demeny arranged for Ian to meet with Tymur, our new student from Ukraine who recently joined the sixth grade.  They noted how they had traded hometowns, with Tymur now in New York and Ian in Irpin in the spring and summer.  Tymur shared how he was warmly welcomed in New York and at the school.  Ian later remarked, "Seeing such inhumanity met by such warm humanity is inspiring. Bravo St.B’s"
We appreciate Ian finding the time in his busy schedule to spend the morning at St. Bernard’s.  A special thanks to Barbara Gridley, Oliver Bowcock, Eric Hill, and Evan Moraitis for helping arrange the talk.  Faculty and students alike were inspired by Ian's passion to stand up for what is right and his desire to do what he can to help strangers in need.
To learn more about Zero Line, visit their website: zeroline.org or email Ian Miller at igm@mit.edu.  Click through the photo album for photos taken by Ian and his colleagues. 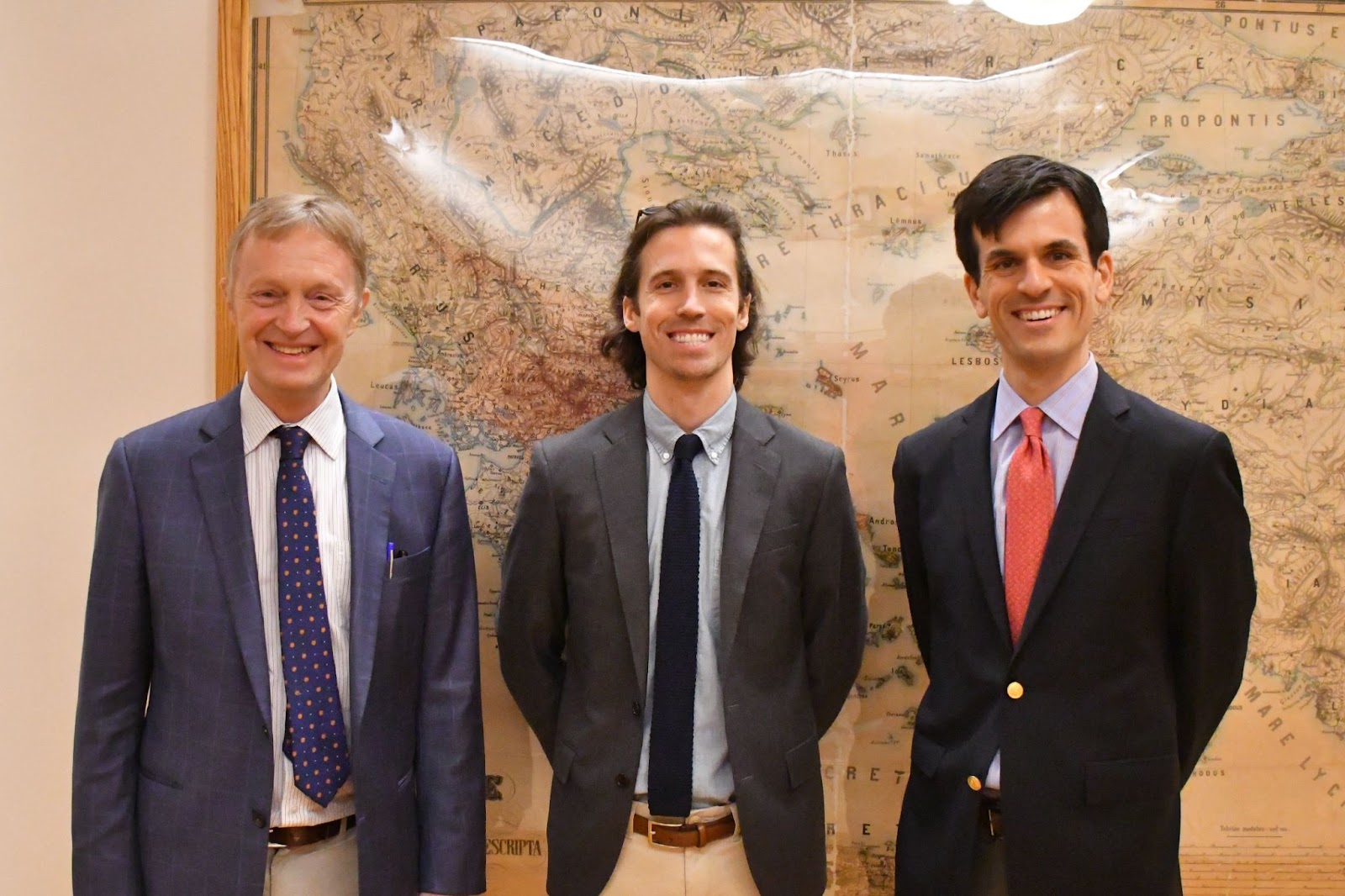