Community Discussion of the History of Asian American Inequity

4/22/2022
On Tuesday, April 19, Professor Joyce Moy spoke to the school community about the history of the Asian American experience.  It was the school’s first discussion on this topic, and the evening was extremely well received by the large audience of parents, faculty, Old Boys, and parents of Old Boys. 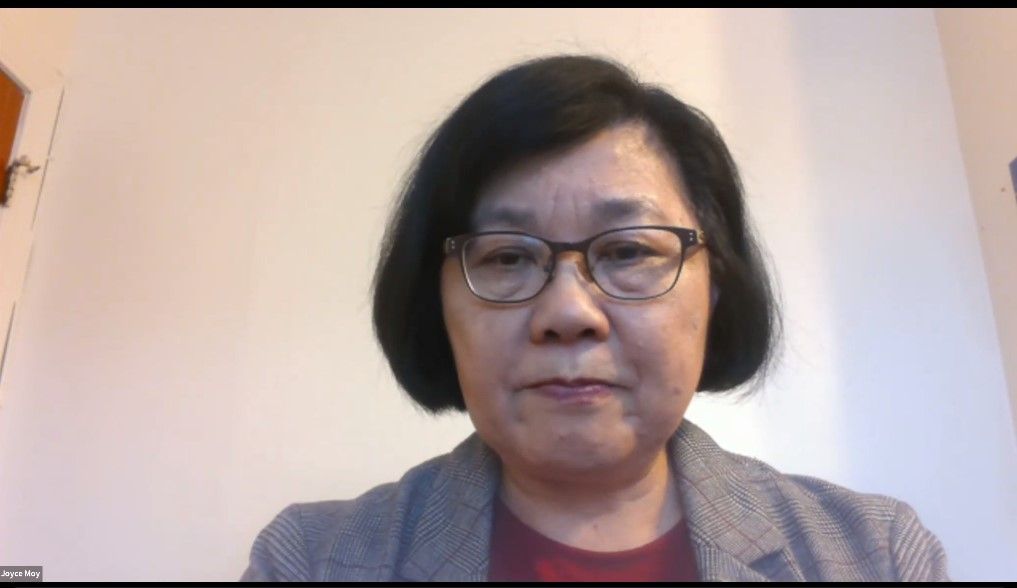 Ms. Thomas, our director of Diversity, Equity, Inclusion, and Belonging, Patricia B., president of the Parents Association, and current St. B’s parent Belinda N. searched for months to find the perfect speaker to communicate these complex issues to our community.  They were thrilled to engage Professor Moy, an accomplished academic and attorney.  Most recently she was the executive director of the Asian American/Asian Research Institute of The City University of New York.
Professor Moy led us through a presentation which led to a series of thoughtful questions from the audience.  Her lecture started with a definition of Asian Americans, as they are classified by the U.S. Census.  Asian Americans make up about 6% of the total US population and are 16% of the population of New York City.  Nationally, 85% of Asian Americans come from the following six nationalities: Chinese, Indian, Filipino, Vietnamese, Korean, and Japanese.  Another interesting series of data points centered around the timing of Asian immigration. Almost 60% of U.S. Asians are foreign-born; this number is 71% in New York City.  Most Asian Americans in New York are relative newcomers, explained Professor Moy.  This is due to numerous laws and policies restricting Asian immigration to the U.S., including the Chinese Exclusion Act of 1882 which barred Chinese immigration to the U.S. and barred Chinese from becoming naturalized citizens.  The Immigration Act of 1924 further restricted Asian immigration by barring all Asian immigrants (except Filipinos “nationals”), including Chinese, Japanese, Koreans, and Indians, who were denied citizenship and naturalization, and were prevented from marrying Caucasians or owning land.  It was not until after the Immigration Act of 1965 that immigration opened to the southern and eastern hemispheres, including Asia.
Asian American families who have been living in the United States for generations have a unique set of challenges, as they are perpetually considered foreigners.  Professor Moy recalled being taunted as a child, hearing “Go back to China,” when in fact her family is made up of six generations of Americans.
We have all read about the rise in Asian discrimination and hate over the last two years, but as Professor Moy pointed out, this is nothing new.  There is a long history of violence, exclusion, and scapegoating, albeit one that is not very well known by the general American population.  After Chinese people immigrated to the U.S. for the Gold Rush of 1848 and to build the Transcontinental Railroad, a financial crisis led many Americans to blame the Chinese for taking away jobs, even though, at the time, the Chinese only made up 0.002% of the American population.  This eventually led to the passage of the Chinese Exclusion Act.  In addition, many schools would not allow Chinese children.  San Francisco created a segregated schools for “Mongoloid and Chinese” despite the California Supreme Court ruling that all children were entitled to a public education (Tape vs. Hurley, 1885).  In 1942, during World War II, Japanese Americans were rounded up and forced to relocate in internment camps.  More recently, in 1982, Vincent Chin, a 27 year old Chinese American, was beaten to death by two white American auto-workers who mistook him for Japanese, and blamed him for the loss of automotive jobs.  The killers were fined $3,000 each and given zero prison time.  After September 11, 2001, anti-Muslim sentiment led to serious physical attacks and killings of Muslims, as well as South Asians who were mistaken for Muslims.
Professor Moy also discussed the recent increase in hate crimes against Asians after COVID-19, where New York City saw a three-fold increase in hate crimes against Asians and the U.S. saw nearly 10,000 incidents reported across the nation.  The majority of these attacks have been on women and the elderly, making the violence particularly heartbreaking.  Our school community has been asking how to best support our Asian American families.  Professor Moy implores us to check in with our Asian American friends and to acknowledge and validate their fears.  Knowing the history of the Asian American experience is tremendously helpful and “a greater understanding would go a long way in helping some of these problems to be alleviated in the future.”
Ms. Thomas concluded the evening by thanking Professor Moy for her thoughtful presentation and Belinda N. for her steadfast pursuit to raise awareness about the Asian American experience.  Ms. Thomas also reminded us that May is Asian American and Pacific Islander Heritage Month, which celebrates generations of Asian and Pacific Islanders who have made great contributions to America's history and will be instrumental in its future success.
For those who missed the evening, but would like to watch the recording, please e-mail cmacdonald@stbernards.org.
Back