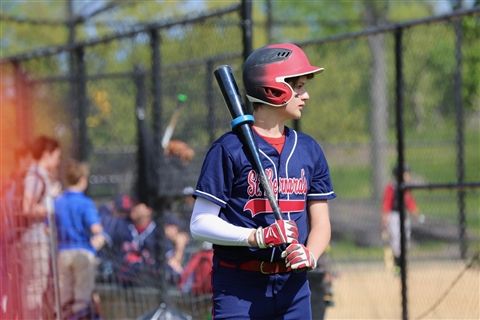 Our Own Great Game of Baseball, Baseball!

This is a special year for St. B’s baseball.  The boys on the Varsity White team have been playing together since fifth grade and have known each other since they were in Kindergarten.  They are a close-knit group, and it shows on the field.  We spoke with some of the players on the Varsity White team to share an insider’s perspective.  All of the boys we spoke with agree that playing St. B’s baseball is great because you’re playing with friends whom you know really well.  They all get along, especially on the field. Another thing they all agree on is their favorite baseball team, the Yankees.
George W. is a pitcher on the Varsity White team.  Pitching came naturally to him.  He has always been good at throwing and admired his older brother, who was also a pitcher.  George’s advice for anyone considering becoming a pitcher is to focus on throwing strikes.  To be a good pitcher, you need to zone everything else out and have good focus.  When you’re not in a game you need to practice a lot.  He believes that if you’re not a strong runner, baseball could be a good sport for you.  However, when there is an infield pop-up, you need to run as fast as you can.  He warns that playing on the Varsity White team for Coach Miceli can be intense, but baseball is fun to play.  You either love it or hate it.  George loves it.  He gets a sense of satisfaction playing the game and sees it as a way to relieve some stress.  He believes baseball is 80% physical, but there is strategy involved, which he likes.  He also enjoys getting to know his friends better by hanging out on the field.
Thomas W. is a catcher for the Varsity White team.  He works closely with George, who can throw four pitches:  four-seam, two-seam, change-up, and curve ball.  As the catcher, Thomas has to decide which pitch George should throw and call it.  Thomas bases his decision on how the pitcher is doing and where the batter is standing.  For example, left-handed batters only get curve balls.  Thomas stressed that catching sounds simple and easy, but it’s really important in a game.  An umpire is more willing to give you the call if you catch the ball.  His advice to anyone playing the catcher position is to work on your throwing.  It’s a long throw from home to second base.  Thomas started playing baseball when he was four.  He likes playing baseball because it’s athletic and outside.  He especially likes playing at St. B’s because he gets to play with his friends.  The most memorable moments for him have been when his teammates hit home runs.
Cameron C. plays first base and pitches.  His dad watches a lot of baseball and helped spark Cameron’s interest in baseball.  Like many of his teammates, Cameron plays baseball at St. B’s and on another team outside of school.  He has noticed that St. B’s focuses on fielding ̶ catching and throwing the ball, cut-offs, and knowing to whom to throw the ball.  Coach Miceli believes if you can catch and field well, you can win games.  Cameron also likes situation-based running, which fielders work on often in practice.  As a first baseman, Cameron is engaged with the game and is always ready.  He loves baseball, so he is naturally engaged all the time, trying to guess what pitch the pitcher will throw or trying to predict where the ball will go.  He stressed how important it is to be fast, to react quickly, and to remain strong mentally.  You have to be focused on the small things all the time.  Cameron enjoys playing “signature Miceli baseball,” working the pitch, getting as many guys on base as possible, and stealing a base or two once you’re on base.  He is proud of his teammates and looks forward to playing with them in their final games of the season.
Jameson C. plays shortstop and pitches.  As captain of the infield, before each pitch is thrown he has to decide where everyone in the field should be positioned.  His advice to anyone playing shortstop is to be commanding and outgoing.  You can’t be scared; you can’t wait back on the ball.  You have to go to the ball, be knowledgeable, and be confident.  Baseball is a game of inches.  Jameson has seen himself grow over the years.  He started out as a smaller player, but he was always watching and learning.  He stresses that being knowledgeable of the game is most important, and you have to understand the game very well to be good at baseball.  When Jameson pitches, he has learned to have confidence in his teammates and to trust that they will have his back.  Focus is important in baseball, no matter what position he is playing.  To stay focused, he remembers that he can’t let his team down.  He also has found so many things to love in baseball that it’s easy to stay focused.  His advice to St. B’s fifth grades is that baseball is something you definitely want to try.  You will make friends, and you will have to work together, which will only make your friendships stronger.  Let baseball make you a better person.
We are immensely proud of the athletes on the Varsity White team.  They have two games left in the season. They play against Buckley on May 9 at 3:30 p.m. and against Collegiate on May 11 at 3:30 p.m.  They are definite contenders for the league championship, and we wish them the best of luck!
Special thanks to Elizabeth R. for the photographs.
Back