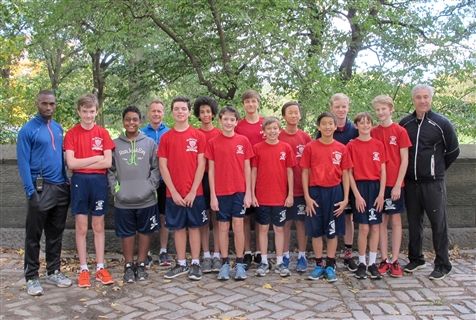 The boys on the cross country team are a tight-knit group.  We spoke with three members of the team, who shared their perspectives on long distance running at St. B’s.

Campbell H. started running with the St. Bernard’s cross country team when he was in fifth grade, and he has always loved running.  At a young age he joined his mother on her runs in the park, and she was surprised by how well he could keep up.  Campbell appreciates the mental challenge of cross country.  It is as much about breaking through mental barriers as it is about overcoming physical limitations.  He enjoys setting goals for himself and pushing himself to accomplish those goals.  He warns that cross country is not a sport for the weak minded.

St. B’s cross country training consists of long runs, sprints, uphill repeats, and drills.  They run together as a team throughout Central Park.  Campbell could draw a map of the different running paths in the park from memory because he has been running there for so many years.  He enjoys talking with some of the younger runners on the team, encouraging them, and inspiring them to reach their goals.  Campbell knows how rewarding it can be to receive a compliment for accomplishing your goal, as his coaches have done for him throughout the years.

David S. is a fifth grader who is new to the St. Bernard’s cross country team this year.  He enjoys getting outside with his friends during practices in Central Park.  He particularly likes running along the Bridle Path, an outer loop around the reservoir.  He has noticed improvements in his running since the beginning of the year.  Running one mile used to be hard for him, but now running one and a half miles is easy, and he can run three miles without any trouble.  David’s advice to someone first starting out with cross country would be to try to walk as little as possible.  Start by running half a mile, and don’t try to run too fast.  Try to find a pace that feels comfortable.

David described the importance of practicing uphill running, because the course at Van Cortlandt Park, where St. B’s participates in meets, includes “the hill,” the most famous landmark section of the Van Cortlandt courses.  To prepare for this, the team runs hill repeats as part of their weekly practices.  His coaches have taught him to try to run as fast as possible on the uphill part and recover on the downhill section.  His coaches have also taught him to keep on trying to do his best.  This advice came in handy during a recent test when David was struggling to figure out a math problem.  Instead of giving up, he kept trying to solve the problem in different ways and eventually got the correct answer.

Peter J. joined St. B’s cross country team when he was in fifth grade.  He thought he would try running because he wasn’t interested in soccer or other sports offered at the time.  At first the idea of long distance running was daunting, but over time he became stronger and faster.  He learned how to pace himself and push beyond his comfort zone to achieve a faster pace.  He found his favorite season to run is at the end of fall and in the beginning of winter.  Now as an eighth grader he sees cross country as a defining characteristic of his experience at St. B’s.
Peter describes that within the cross country team there is an understanding that not everyone is the fastest, most accomplished runner.  Teammates motivate each other to run further and faster.  Peter also appreciates the opportunity to talk with his friends on long distance runs.  It’s a nice time to catch up.  Peter’s advice to anyone who is just starting cross country is to wait and be patient.   Running is a meditative experience.  You will learn how to pace your body and your mind.  Running is a sport in and of itself, not just a warm up for P.E. In the end, cross country is definitely worth it.
Back