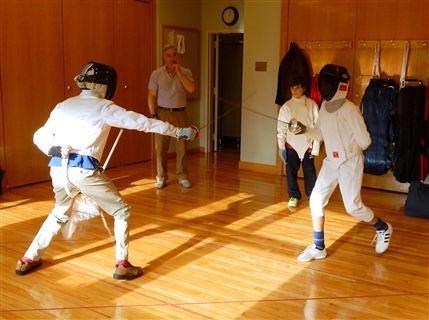 
The fencing curriculum at St. B’s begins in second grade when boys are taught basic attack and defense moves.  There is a focus on footwork from the beginning.  In grades III and IV boys continue to learn the basics and are introduced to more strategy.  They are taught how to plan and execute compound attacks.  From grade V onward, boys learn bouting techniques while they continue to perfect their foundational skills.  Mr. Maggio often puts on his master’s jacket and fences with students.  This type of training is important to train students’ muscles so that their reactions become reflexive and faster against an opponent.  Ideally, with proper training, a fencer’s reactions become automatic and calculated.

For anyone unfamiliar with fencing, a bout is a friendly competition between two fencers when a running score is kept.  Before beginning a bout, fencers salute.  There are five touches in a bout.  The fencer who wins the most touches in a bout wins that match.  The Director oversees the bout and interprets the actions in a match.  The Director establishes who has right of way and who earns each touch.

Mr. Maggio started fencing when he was in fourth grade.  He was recruited by the University of Notre Dame, and during his time there, his team won the national championship.  While growing up in New York, he fenced for the Santelli Club in Chelsea.  Years later he has brought this experience and more to the St. B’s community.

We look forward to hearing cutting-edge news from St. B’s fencing team throughout the year.
Back