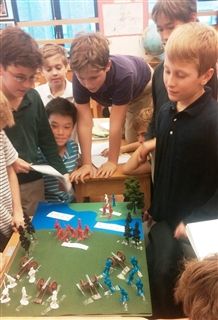 
To conclude their study of the American Revolutionary War, boys in the sixth grade presented creative research projects in class that they produced over the fall term.  Each boy picked an important battle, event, or component in the Revolutionary War at the beginning of the term and extensively researched his topic in preparation for three separate in-class-essays.  Upon completion of the third essay, the boys crafted oral presentations that included a visual component.  The boys produced unique and remarkable models, dioramas, and short films, as well as a pop-up art gallery.  Some boys brought in interesting props and artifacts such as maps and a gun powder horn.  Each boy taught his classmates for twenty minutes about his topic of expertise.  Immense creativity and research were employed in their projects, as is apparent in the photographs.


Beck A. built a night-time drama to show Washington’s lucky retreat from Brooklyn.

James D. brought in a replica musket and built a diorama to show the events of Lexington and Concord.

Josh G. created an interactive map of the American defeat at Brandywine Creek

Garret H. made a model and map of the Battle of Cowpens.

Peter J. hand-drew a detailed map to show the American defeat at the Battle of Brooklyn.

Carter L. produced a movie on Revolutionary War weapons. He also brought in real bullets and gunpowder holders, and created a flintlock spark.

Euan L. drew a standing applause after he built a detailed diorama and made the class laugh with the darkly funny story of the Battle of Trenton.

Matthew O. built a replica of Fort Washington and explained the American disaster there.

Topher S. turned the class into an art gallery and walked the class through Revolutionary War art and propaganda.

Teddie S. showed the naval formations of the British and the French by moving around clay boats on his map.

Case S. built a small fort and a siege tower out of twigs to show the trickery of the Swamp Fox.

Marcus S. brought in an interactive diorama to depict the soldier’s movements during the Battle of Guiliford Courthouse.

Max W. created a timeline depicting the heroic dragging of cannons from Fort Tinconderoga to Boston.

Thomas W. used British and American painted dominoes to show the naval combat and the American retreat at Valcour Island.

Will W. built a detailed model of George Washington crossing the Delaware.
Back