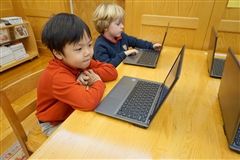 The Digital World of St. Bernard’s

The Technology Department is working to unify St. Bernard’s traditional values with an ever-growing digital world.  Beginning in the Junior School, technology is integrated through purposeful activities that coincide with the curriculum.  St. Bernard’s boys are learning how to use technology responsibly and creatively.
The Junior School teachers have collaborated with the technology department to create opportunities to teach the boys how technology can be used to help them learn.  Inspired by the Art and Artists unit, Kindergarten boys used Google Drawings to create works of arts with lines, colors, and shapes.  While composing technology art, kindergarteners practiced fine-motor skills while learning the basics of computers.  This year kindergarten boys are also using QR codes and iPads to discover hidden letters, sounds, and pictures to reinforce letter sound and name recognition.

In first and second grade, the Smart Board is being used to display Brain Pop video clips and interactive Google Slides, to practice vowel sounds and combinations.  In addition, teachers are integrating iPads to practice math concepts using Xtra Math and Lumio apps.  Xtra Math takes a new approach to memorizing math facts and plays on the boys’ love of competition by setting up a race against the clock and teacher.  Lumio Math reinforces learned multiplication and division concepts using interactive activities.

Third and fourth graders are learning their way around a computer by studying the home row keys, Microsoft Office, and Google Apps.  Ms. Korek, St. B’s typing teacher, is hard at work helping the third grade boys to become proficient typists by creating a little healthy competition to see who can type twenty words per minute by the end of the year.  Ms. Williams is putting the boys’ newly-found typing skills to work and teaching them how to use Microsoft Office and Google Apps such as Forms, Docs, Sheets, and Slides.  The fourth graders are also introduced to the basics of coding through the Scratch program.

The higher grades in Middle School are using an array of technology to enhance students’ education.  The fifth graders learned the art of researching on the internet and how to decipher between valid and invalid information.  To hone their newfound skills, the boys chose an Indian temple to research.  The research is being used to design a tourist website that will advertise the temples and build a structure in Minecraft that will be displayed at the Multicultural Fair!  In sixth grade St. Bernard’s teachers are taking technology to new heights by hosting interactive book clubs using Google Classroom and traveling to Korea using Skype!

Upper School students have the opportunity to choose between 3D Design and Programming in seventh grade and Computer Build, Film, and Robotics in eighth grade.  In seventh grade 3D Design, the boys learn its history and the basics of Tinkercad.  They then use technology to print a working lamp that projects unique designs.  Mr. Parsons is using Python to teach the boys computer programming.  Earlier in the year the boys programmed simple games and a map of the Electoral College while learning the basics.  The boys are currently programming a “choose your own adventure” game that tests their programming and critical thinking abilities.

St. B’s eighth grade boys built their own computers from individual components and gained an understanding of how the hardware works.  In film class they produced a commercial to promote a variety of charities.  They wrote a script, developed a storyboard, utilized a green screen, and learned how to use the Adobe Premiere editing program.  The winners of this year’s film competition were Peter J., John R., and Will M. from Mr. St. Clair’s eighth grade homeroom!

St. Bernard’s Technology Department is dedicated to integrating technology at St. Bernard’s in meaningful ways and showing the boys of all ages how to use technology to move them ahead in our increasingly digital and collaborative world.
Back