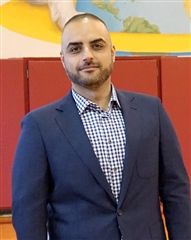 On May 9, 2017, boys in the Middle and Upper schools had the opportunity to hear from Dr. Hassan Aslili, a medical student who spoke about his experience as a refugee.  Dr. Aslili opened his talk by differentiating between immigrants and refugees.  He explained that a refugee is someone who is forced to flee for his or her safety, leaving everything behind.
Dr. Aslili grew up in Tripoli, Libya.  After the fall of Qaddafi in 2011, Libya engaged in a civil war, and life became very difficult.  He was forced to flee in 2014 when authorities discovered that he was gay.  If he had remained in Libya he would have been killed.  When he realized he had to leave, he went to Lebanon first because he had friends there.  He registered with the United Nations as an asylum seeker and continued to live there for two years.  He explained that seeking asylum is a long process, and only 1% of requests from Libya are approved.  From Lebanon, he moved to Slovakia for the final interviews.  While he was in Slovakia he lived in a refugee camp.  He emphasized that as a refugee, you have to start your life from scratch.  He reminded the boys that they are in a great school, in a great country, with many wonderful opportunities.  He encouraged the boys to work hard and to never take anything for granted.

He invited the boys to ask questions about his experience.  The boys were eager to hear about the conditions in refugee camps and what he is doing now.  Dr. Aslili explained that in the United States, you can live as a refugee for one year.  After one year you can apply for a green card, and after five years, you can apply to become a citizen.  He is working towards becoming a doctor.  While he attends school he also translates from Arabic to English at hospitals in the area.

One boy asked what he could do to help refugees around the world.  Dr. Aslili complimented the boys for initiating a fundraiser to benefit children refugees in Syria.  He also encouraged the boys to understand the differences between refugees and immigrants, and to help further the conversation about refugees with family members and friends.  We thank Dr. Aslili for speaking to our boys about his experience.  Thanks to Ms. Oshins for organizing.
Back