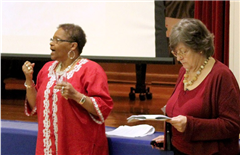 LYNDA BLACKMON LOWERY, AUTHOR OF TURNING 15 ON THE ROAD TO FREEDOM, SPEAKS TO ST. BERNARD’S BOYS

Lynda Blackmon Lowery and Susan Buckley brought history to life for Middle and Upper School boys last week.  Susan Buckley is a historian who collaborated with Elspeth Leacock in 2006 to write Journeys for Freedom: A New Look at America’s Story.
They were searching for someone who had taken part in the voting rights movement and called the National Voting Rights Museum in Selma.  Coincidentally, the person who answered the phone was Lynda Blackmon Lowery’s sister.  Susan and Elspeth met Lynda, and the rest is history.  Together the three women launched a series of school presentations called, “History Can’t Happen Without You,” where they focus on Lynda’s story to teach young people how vital they are to history.  Then, realizing that Lynda’s story should be told in its own book, the three collaborated on the book Turning 15 on the Road to Freedom, a memoir of Lynda Blackmon Lowery, the youngest person to participate in the 1965 Selma Voting Rights March.

The boys were enrapt from the moment Lynda first spoke: “By the time I was fifteen years old, I had been in jail nine times.”  Lynda was born in 1950 in segregated Selma, Alabama.  When Lynda was seven years old, her mother passed away.  Lynda’s neighbors said that had her mother been white, and thus had access to medical care, she might have been saved.  At a very young age, Lynda vowed that no one else would ever be without a mother because of her skin color.

When Lynda was 13 years old, she heard Dr. Martin Luther King, Jr. speak at a church in Selma.  It was a transformative experience for her.  She felt as though he was talking directly to her.  He fixed his gaze on her and explained that you could change anyone with “steady, loving confrontation.”

After Dr. King’s first visit, the African American community met nightly for mass meetings in the chapel to organize their efforts to stand up for voting rights.  They made the difficult decision to train teenage children to march in non-violent protests to protect their parents from getting fired from their jobs or evicted.  Lynda had a full year of training in non-violent confrontation before she started marching.  She was taught to march until the group was stopped and then to kneel and pray.  She would march, get arrested, and go to jail.  Dr. King returned to Selma in 1965 to lead the Selma voting rights movement.  As Lynda described it, “if I wasn’t in jail I was in the choir behind Dr. King.”

Lynda described how she overcame her intense fear after being attacked in a protest in Selma on March 7, 1965, Bloody Sunday.  Her path to healing came from the five-day, 54-mile march from Selma to Montgomery.  She was one of only 300 people allowed to make the entire journey.  She endured difficult conditions and, most importantly, she overcame her fears.  Lynda explained, “We were determined to do something and we did it.  If you are determined, you can overcome your fears, and then you can change the world.”  On August 6, 1965, President Johnson signed the Voting Rights Act of 1965.

Lynda ended the presentation saying, “The Selma Movement was a kids’ movement. We didn’t know it at the time, but we were making history.  You have a voice too, and with determination, you can be a history maker just like me.”  The boys heard her loud and clear.  After a standing ovation, they followed up with an impromptu drumroll on the gym floor.

St. Bernard’s was honored to hear from Lynda Blackmon Lowery and Susan Buckley.  The Japanese version of their book, Turning 15 on the Road to Freedom, has recently been published.  They continue to work hard to share their message with young people everywhere.
Back