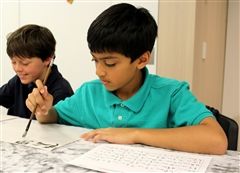 THE ART OF CALLIGRAPHY

Fifth graders have been learning about the ancient art of Chinese calligraphy and were able to try their hands at it during recent field trips to the China Institute.  Mr. Clavel and his class visited the China Institute on April 19, 2016, and Mr. Brady and his class made the journey on May 9, 2016.
Each field trip began with a presentation about the Chinese writing system, one of the oldest in the world.  According to ancient legends, Chinese characters were created by Cangjie, who is credited with creating the concept of resemblance symbols that represent everything in the world around us, from mountains to rivers to people.  Since that time, the symbols have developed and changed from oracle bone inscription to small seal script, used during the Qin Dynasty in 221 B.C.E.  The writing system went through another transformation during the Han Dynasty into clerical script, and finally, at the end of the Han Dynasty, developed into regular script which is still used today.

The boys also learned that historically, Chinese scholars learned four arts:  Qin, a stringed instrument; Qi, a game of strategy; Shu, Chinese ink and brush calligraphy; and Hua, Chinese brush painting.  The boys learned about the relationship between Chinese calligraphy and painting.  The instructor showed boys examples of calligraphic symbols and they were able to guess what each symbol represented.  The instructor was greatly impressed by this and also appreciated how well-prepared the boys were for the visit.  It was clear they were familiar with the history of China and Chinese calligraphy.

The real fun began when the boys had the opportunity to try painting some traditional Chinese calligraphy.  Each boy was given a sheet of words and symbols and was taught how to hold the brush and dilute the ink.  They had a practice round to get the feel of the brush and ink, and then were given rice paper to create their final masterpieces.