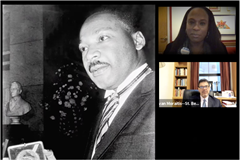 Discussions on Civic Engagement with the MCNY and a MLK Assembly

Mid-December, Middle School and Upper School students attended sessions with educators from the Museum of the City of New York to discuss civic engagement and the Civil Rights Movement in New York City.
The boys learned about local activism and student-led actions to desegregate NYC schools, in addition to the city’s role as a major center for organizing across the nation that brought activists like Dr. Martin Luther King, Jr. to New York.  While we continue to learn about the history of racism in the U.S., we should also appreciate the history of anti-racism in our country too, especially in our very own city.
During the Zoom sessions, the boys were engaged and asked thoughtful questions.  They especially enjoyed learning about the 1964 school boycott, known as Freedom Day.  Half a million students came together to protest the unfair distribution of resources across New York City public schools in what was essentially a segregated school system.  One St. B’s boy commented that he couldn’t understand how anyone could be opposed to the student’s demands.
The workshop focused on events in New York and reminded us that the Civil Rights Movement was not limited to the southern states.  Several St. B’s boys remarked that they were proud of their city and were happy to learn about the important role so many New Yorkers played in fighting against racism.  The MCNY educators imparted on the boys that history is happening right now, and the events we are witnessing today will be in history books.
Last night, the MCNY educators led a discussion on the same topic with parents.  Mr. Moraitis opened the evening by stating that last week’s events at the Capitol building show us that the role of an educator is now more important than ever.  St. Bernard’s strives to impart on the boys the values of honor, honesty, justice, equity, and inclusion.  An eighth grader,  Holden C., joined the parents last night, as he was unable to attend the student session due to a school interview.  Holden made many insightful comments and it was terrific for parents to hear a student’s reaction to the presentation.  For those who missed the discussion, the MCNY is holding two free sessions for families on MLK, Jr. Day.

To conclude the week, this morning’s assembly was dedicated to Dr. Martin Luther King, Jr. and featured an inspiring presentation put together by Ms. Thomas, the school’s Diversity Coordinator.  It included a recording of a speech Dr. King gave to students where he said each one of us should create a blueprint for the life we want to lead.  Ms. Thomas asked the boys to write down one of their blueprint ideas and these will be posted in the lobby next week.  Parents may watch her video by visiting the Parents Association board on the school website.

Many thanks to the Community Gathering Committee for coordinating the MCNY sessions and to Ms. Thomas for this morning’s assembly.
Back