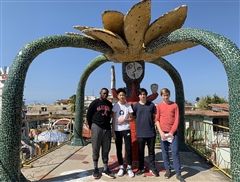 The ninth grade had a fascinating trip to Cuba. Our itinerary started in Havana and involved travel to the Bay of Pigs, Cienfuegos, Trinidad, and Santa Clara.  In General Knowledge and geography classes, we had already learned about the history of Cuba: its years of Spanish rule and subsequent independence, the Batista years, and Castro’s rise to power.  To ninth graders, the Cold War is a distant abstraction, but visiting Cuba gave a clear example of that era and its influence.
One of the most interesting parts of our trip was staying in a casa particular, the Cuban equivalent of Airbnb.  We occupied several apartments in a regular apartment block in Havana.  Many of the buildings are in need of repair, but there is an outgoing and friendly spirit among the people.  Our host lived next door and made us breakfast each morning; from every apartment there was often infectious Cuban music playing, and the laundry hung out on the courtyard.  Although we were privileged tourists, we were given a view into regular life in Havana.  For example, we witnessed the delivery of a big new refrigerator - an important event - and we soon got to know the residents and even their pets.  We had taken several soccer balls and pumps with us, so were able to give them to any children playing soccer in the neighborhood.  They were usually excited to receive them.  In Havana we were lucky to have a highly-educated and competent young guide who took us around the city and who also joined us for our travels out of the capital.  She was proud of her Cuban heritage, but she sees the many problems facing her country.  Our driver was a serious and conscientious man who enjoyed meeting the boys.  He spoke no English, so the Spanish students were forced to communicate.  We chugged along on an ancient minibus that had minimal air-conditioning, but it held all of us and our luggage.  We traveled through some dramatic landscapes and, especially in Trinidad, learned about the grim history of slavery and the sugar cane plantations.
We had many lively adventures in Cuba.  The ninth grade learned about beautiful old cars, colonial architecture, Cuban cooking, Communism, Hemingway, cigar production, and many other aspects of Cuban life.  The ninth graders now even know how to make an alcohol free mojito.  In the spring the class will be doing an assembly presentation about Cuba and all we experienced.
Back